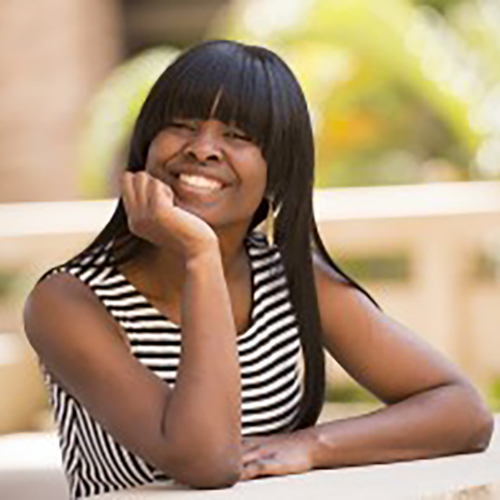 Chacoryia “CeCe” Burns knows what it’s like to fall down and get back on your feet.

In her short 19 years, she has bounced back from devastating losses – first, at age 13, from the death of her mother, then from the murder of her uncle. But with the help of her family, her church and her faith, Chacoryia has persevered and is the winner of this year’s Mary S. Collier Distinguished Graduate Award.

Every day, she is inspired by the words of her late uncle, who frequently told her one maxim: “Nothing comes to a sleeper but dreams.”

As a teenager, Chacoryia often pondered his words, uncertain exactly what he meant. Ultimately, she decided his message was simple: If you want your dreams to come true, you’re going to have to work for them.

And Chacoryia has worked relentlessly to make her dreams come true.

A good student throughout her elementary and middle school years, Chacoryia was 12 when her mother had a heart attack. Hospitalized and diagnosed with congestive heart failure, 38-year-old Chelsea Howard, was transferred to a nursing home to recover. Unable to walk or speak, her mom would still smile when Chacoryia came to visit and talked about the books she was reading.

Yet Chacoryia – the eldest of three children — was devastated to come home one day to find her grandmother’s home full of family members. Her mom, they told her, had passed away. Full of grief and reeling from her mother’s absence, Chacoryia, then 13, struggled to find her footing. In school, she lost focus. She pressed on, however. And then, just as she was beginning to find her path, she experienced yet another setback: Her uncle, the one who’d given her those words of wisdom, was shot and killed.

But in 11th grade, Chacoryia began to rebound. And by her senior year, she was back, pushing herself academically. She excelled in her honors English class at Evans High, prompting her teacher, Juan Chisholm, to push Chacoryia to attend college.

And though Chacoryia dreamed of going to Florida A&M University, Chisholm had another idea: He recommended she join Valencia’s Bridges to Success program.  Now, looking back over her college career, Chacoryia says Bridges was the key to her success at Valencia.

In her first two semesters at Valencia, she earned a 3.5 GPA and was soon invited to join Phi Theta Kappa, the national honor society for community college students. Through the Bridges program, she joined Valencia Volunteers and soon began contributing articles to the Bridges monthly newsletter. She also began participating in REGAL (Remarkably, Elegant, Gifted, Ambitious, Ladies), the Bridges mentor program for young women.  And, along the way, she discovered more opportunities, including the chance to appear on local TV in public-service announcements for Black History Month.

Juggling her schoolwork with her other responsibilities hasn’t been easy. Chacoryia works 30 to 35 hours a week at Wendy’s, and has worked as a student assistant for Valencia Volunteers between 10 and 20 hours a week. With no car, she travels to and from campus on the Lynx bus.

Yet, for Chacoryia, the sacrifices have been worth it. “My mom and my uncle would be so proud of me,” she says. And she knows that her little brother and sisters – Zoria, 15; Kalib, 11; and Jamella, 9 – see her as a role model.

Now poised to enroll at Florida A&M University in the fall, Chacoryia has set her sights on her next dream – majoring in journalism, with the goal of working for Vogue magazine one day.

And she won’t rest until she accomplishes those dreams. After all, nothing comes to sleepers but dreams.