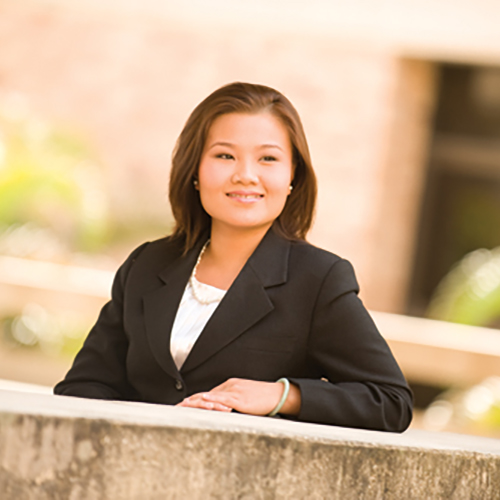 Academic excellence, community service and student leadership have earned Kim Do the honor of being named the 2009-2010 Distinguished Graduate by the Valencia Alumni Association.

Kim gave this year’s commencement speech on Saturday, May 8 at 10 a.m. at Silver Spurs Arena, Osceola Heritage Park, in Kissimmee.

Born in Vietnam, Kim moved to the United States with her family when she was just nine years old. While her father had his own business back home, he gave it up and took a minimum-wage position here in order to provide Kim and her younger sister the opportunity for a U.S. education. His efforts were not in vain.

Kim quickly adapted to her new life, overcoming culture shock and learning a new language in order to make friends and succeed in school. Now, as a graduating Valencia student, she holds a 3.64 GPA and has earned a reputation for her involvement around campus and within the community.

As president of the Alpha Phi Zeta chapter of Phi Theta Kappa International Honor Society on the Osceola Campus, Kim wanted to inspire other students to become active as well. To increase membership, Kim promoted the group, hosted orientations for new members and developed a rewards program for participation. Under her leadership, the group’s number of active members has nearly tripled.

“Kim really wanted to improve the chapter and make a difference in our college and community,” said Albert Groccia, mathematics professor and PTK advisor. “She really believes that Phi Theta Kappa is a wonderful opportunity for students to learn how to communicate, become leaders and help the community.”

Through PTK, Kim has led many community service initiatives. She has helped to organize bake sales, car washes and cookouts to raise funds for Relay for Life and has volunteered with several organizations, including B.A.S.E. Camp Children’s Cancer Foundation, Give Kids the World, Second Harvest Food Bank and Florida’s Nature Conservancy.

“It’s important for me to give back,” said Kim. “Because I have been given opportunity, I want to pass that on. It’s almost like a rent you pay – giving back to those around you and to the community.”

During her time at Valencia, Kim has also served as the parliamentarian for Phi Theta Kappa, as the treasurer for the Student Government Association and as historian for the Honors Student Advisory Committee. She has been named to Valencia Dean’s List, the National Dean’s List and the 2008-2009 All-Florida Academic Team. She is the recipient of Phi Theta Kappa’s High Star Achiever Award and was nominated for 2009’s Who’s Who Among Students in American Universities and Colleges.

Kim graduates from Valencia with an Associate in Arts degree focused in biology. She plans to pursue a bachelor’s degree in chemistry and is currently awaiting admission from University of Notre Dame, University of Central Florida and Florida State University. Kim’s ultimate goal is to become a plastic surgeon so that she can help children with birth defects.

As she leaves Valencia, Kim continues to encourage other students to get involved.

“Dream big and have courage to take on big roles. Do not pass on an opportunity to be a leader in your school or community.”