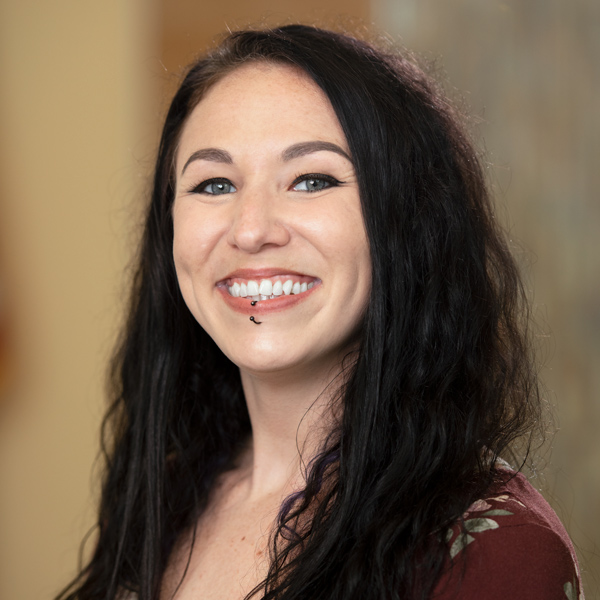 When Leah Basaria arrived on campus at Valencia College, she took one look around and decided to get her credits and degree and graduate as quickly as possible.

“Coming into Valencia, I was very apprehensive,” she says. “In my first class, New Student Experience, I was older than the professor.”

But Leah Basaria had come to Valencia College at a crucial juncture in her life – after a family tragedy that sent shock waves through their family. In 2015, her brother-in-law committed suicide, but it also sent her mother-in-law into a deep depression, and she too would later take her own life. Determined to learn how to help people battling depression and dedicating everything she does to her brother-in-law and mother-in-law, Leah began taking psychology classes at Valencia, but along the way, she discovered a support system at Valencia that gave her a new direction.

And now, Leah has been named the Mary S. Collier Distinguished Graduate for 2022.

“Going to Valencia has been the most fulfilling and gratifying and isolating experience,” she says as a first-generation student. While her family encourages her every step of the way, she doesn’t feel that it is easy for some of them to fully comprehend everything she is doing. Leah’s husband expresses pride in her but doesn’t understand everything she is saying when she goes off on passionate rants. “Which is why I’m so grateful for this insane support system I have at Valencia College.“

At Valencia College, Leah became an honors student and won several research and student of the year awards. Although she’s married and has a nine-year-old son, Leah also stays busy at Valencia College, where she works works as a student CARE coach to help students and also works part-time as an assistant to New Student Experience and Psychology professors.

Meanwhile, she also volunteers as a grief facilitator at the nonprofit, New Hope for Kids, which helps kids cope with the death of someone in their lives.

In high school, when she was 16, Leah’s father and mother got divorced. Soon Leah found the wrong crowd – and was determined to fit right in. Although she was a multi-sport athlete, she was drawn toward people in their 20s and 30s whose idea of recreation leaned more toward drugs and alcohol.

And though Leah was a good student, taking AP classes at Lake Brantley High School, the allure of the party life proved too tempting. Months before graduation, she dropped out of high school, forgoing a Bright Futures scholarship. To make money, she did body piercings and, after she turned 18, she began tending bar at nearby clubs.

It didn’t take long for Leah to have some scrapes with the law and a criminal record. And though she was making hundreds of dollars every night tending bar, she needed a different job to comply with her probation. So she went to work at a local restaurant.

And that’s where Leah’s life began to change. Sitting down with her, her boss said, “In 10 years, you’re going to be in a different place.” Leah couldn’t see it. “I couldn’t think about that. I had a criminal record. All I could think was, ‘What am I going to do?’ ”

Today, that path is clearer. She’s studying psychology and she’s forging a new path in the field of mental health.

Beyond that, she has an even bigger dream. “Initially my main thing coming into college was to become a mental health counselor. That has evolved,” she says. Now she’s learning how to write grant proposals, so she can help change the mental health care available in Central Florida. “It’s kinda fun. I didn’t realize that I loved research, but I do. Grant proposals are just research proposals with math.”

What’s next for Leah? We can’t wait to see.