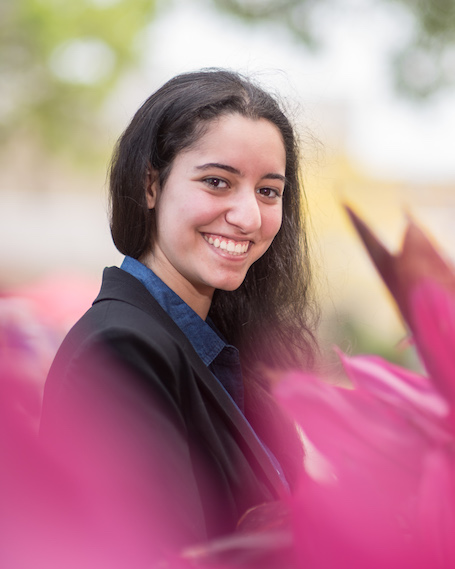 “Coming to America, I was afraid,” says Rula Khalaf strolling towards the photo shoot for the commencement program. Khalaf is Valencia’s Distinguished Graduate for 2016-2017 year, an honor she would not have expected four years ago. “We came here thinking people would hate us. If they saw my mom in the hijab, I thought they might not accept my family, because of the way the few instances of extremism in the Muslim world are portrayed in the media.”

Khalaf’s family first arrived in the United States in 2013, and in her two years on Valencia’s East Campus, there hasn’t been much space (or time) for those initial fears to play out. Standing poised in front of a Tabebuia tree by the Performing Arts Center, she’s blanketed in camaraderie, as friendly waves and shout-outs from peers chime in from across the East Campus mall. Once the shoot is wrapped, she quickly trades her business suit for jeans and an Earth Day shirt, jumping in to volunteer at the student-run booths.

In 2013, In her junior year at Boone High School, Khalaf experienced what she could only describe as “culture shock.” She acclimated herself by volunteering frequently in extracurricular activities.

“Everything was 100 percent different from the way my school back in the Middle East ran things,” says Khalaf. “Besides the curriculum being different, the culture itself was also different.”

At that time, she did not give thought to college. It wasn’t until her senior year at Timber Creek High School, when counselors further encouraged her, that Khalaf warmed up to the idea. Accepted to both UCF and Valencia College, she opted for the more intimate campus setting.

“UCF sounded a bit overwhelming,” Khalaf says. “They would tell me there are up to 1,000 students in a class. I thought, ‘Why not start at a place that has smaller classes, and get the same quality education at a better price?’”

At Valencia, Khalaf quickly resolved to immerse herself in course work, but beyond the classroom she began to notice a culture much different than what she found in high school. She recalls her interaction with the Student Development office.

“I saw diversity I have never in my entire life witnessed,” says Khalaf. “It blew my mind how, in just one office, there were seven different languages spoken, 10 countries represented.”

Inspired by the new setting and excited by Welcome Back Week on East Campus, she looked into becoming more active on campus, exploring the different clubs.

“I volunteered a lot in high school, but I never knew why,” Khalaf says. “Only by attending Valencia did I see the true value of being involved in my community.”

While still getting her bearings at Valencia, Khalaf was unsure which club she would join. Then she met East Campus’ SGA president, Natalie Morales.

“For the first time, I saw a woman in power,” says Khalaf. “She was passionate about her job, and that encouraged me to do the same.” Khalaf became the chief of staff for East Campus’ SGA, and soon joined the Phi Theta Kappa honor society.

Academically, Khalaf enrolled in the Seneff Honors College at Valencia and her honors coordinator, Jane Maguire, noted the extra effort Khalaf brought to every activity. “I would often see her setting up for events, working them, and then dismantling tables afterwards.”

Students in the Seneff Honors College must complete 15 co-curricular hours each semester, which finds them participating in conferences, panels and other events to supplement coursework. In February, Khalaf’s attended the IMPACT conference in St. Louis, which invited students and college professionals from across the nation to discuss social justice and service learning. Lauren Kaplan saw Khalaf “truly in her element” at the conference, speaking candidly on global issues, sharing personal experience with other attendees.

“Rula was sharing her story – her truth – and it was beautiful,” says Kaplan. “That is Rula: confident, truthful, and always striving to expand her knowledge of the world around her.”

In the classroom, Khalaf tackled the standard requirements with gusto. She credits the New Student Experience class with giving her direction. “It’s a mandatory class, and a lot of people think it’s busy work, because maybe they already know what they want to do. But where I’m from, nobody ever asked me what I wanted to be.”

Khalaf took the course seriously delving into the career research, attending all of the recommended Skillshops. She ultimately decided on dentistry, and even took on the role of president for East Campus’s Future Medical Professionals Club. This fall, she will pursue a major in biomedical sciences at University of Central Florida, with aspirations of enrolling in the University of Florida’s College of Dentistry.

This spring, she graduates with an Associate in Arts degree and a 4.0 GPA. When she steps foot on the UCF campus in the fall, it won’t be with the same trepidation as when she first considered attending college. As the Distinguished Graduate, she cites the importance of “persevering through life’s toughest obstacles in search of a better future.” For Khalaf, like many of her peers at Valencia, the simple act of going to college is courageous, but it’s an obstacle she – and the peers she will address at commencement this May – can now consider as one that’s been overcome.

“One of the biggest challenges is feeling accepted,” Khalaf says. “If you’re not accepted into a community, you can’t excel or even participate. Just being accepted here makes me want to do better and make Valencia proud in everything I do.”